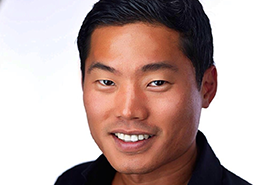 As the Senior Vice President of Worldwide Distribution for INSP, a leading family-friendly entertainment cable channel with more than 80 million subscribers, Mark Kang is responsible for all network content distribution.

Mark has served on industry boards, and has received numerous recognitions, that include: Top 100 executives in Cable Television, Top Minorities in Cable, Rising Stars of Cable TV Executives, Top Affiliate Team, Advisory Board of Cable Center Hall of Fame, National Board of Directors for NAMIC, and Director at Large for the WICT NYC Chapter.

Before he began his career in the cable industry, Mark worked in finance at Morgan Stanley as a financial advisor; and at Tiedemann Investment Group as an analyst and arbitrageur.  Mark was also a talent agent for International Artist Agency, where he represented Grammy Award winning artists.

Mark, who was born in South Korea, and raised in New York City, received his Bachelor of Arts degree from Wheaton College in Illinois.

Mark Kang lives in New York with his wife Monique and their three lovely daughters: Hunter, Kaela and Sloan.