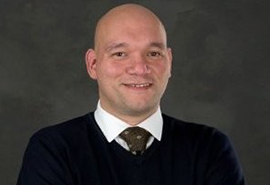 As vice president and general manager of ESPN Deportes, Freddy Rolón oversees all aspects of the ESPN Deportes business including ESPN Deportes television, the leading Spanish-language sports cable network offering the most diverse sports programming with more than 4,500 live hours of content presented every year, currently in 5.9 million Hispanic households and available on WatchESPN.  He also leads the ESPN Deportes Radio business and (ESPNDeportes.com).

Freddy has played an integral role in the development of the company’s content strategy to reach bilingual Hispanics consuming sports content across all of ESPN’s English-language platforms.  He works closely with ESPN’s programming, production, audio, digital and print media teams, to maximize the relevance and appeal of ESPN’s English-language products for U.S. Hispanic fans.

Before officially joining ESPN in 2004, Freddy was an intern for ESPN International in the summer of 2003.  After completing his MBA, he joined ESPN as  senior manager of marketing for ESPN Deportes. He was promoted to senior director, marketing and integration of ESPN Radio (2005-2007), where he oversaw all the marketing efforts for ESPN Radio and ESPN Deportes Radio.

Freddy graduated from Wesleyan University with a bachelor of arts in economics and government and later received a master’s of business administration from the Tuck School of Business at Dartmouth.