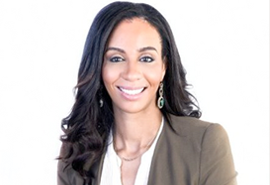 Prior to joining Comcast in 2011, Ms. Ruffins was an English and Spanish producer for the internationally acclaimed television series, CNN Heroes. At CNN, Ms. Ruffins produced awardwinning multilingual stories on “ordinary people with an extraordinary impact” in 19 cities across five continents.

Ms. Ruffins began her career as an on-air reporter for WCAX TV, a CBS affiliate in Burlington, Vermont. She was also a reporter/producer for NPR in Washington, D.C., and a CNN Fellow and contributor for CNN’s Washington, D.C. Bureau. Ms. Ruffins moved to Guadalajara, Mexico in 2003 to learn Spanish and she credits her linguistic skill to the inmates and Jesuit missionary volunteers of the Jalisco State Penitentiary, Centro Preventivo Varonil de Puente Grande, where she served as a volunteer English literacy coach.

Currently, Ms. Ruffins serves as a National Board member of the National Association for Multi-Ethnicity in Communications (NAMIC) on the Executive Committee. She is also a documentary producer and contributor, most recently co-producing the award-winning intergenerational documentary, Life’s Essentials with Ruby Dee, released in 2014. Since 1999, Ms. Ruffins has served as co-founder and volunteer for the Mother-Daughter Senior Shopping Service (SSS), LLC., a decorating service for resident senior citizens and people with disabilities at the University of Pennsylvania Center for Rehabilitation and Care (PCRC).

Ms. Ruffins is a graduate of Northwestern University School of Law and the Medill Graduate School of Journalism. She is also a proud alumna of Spelman College.